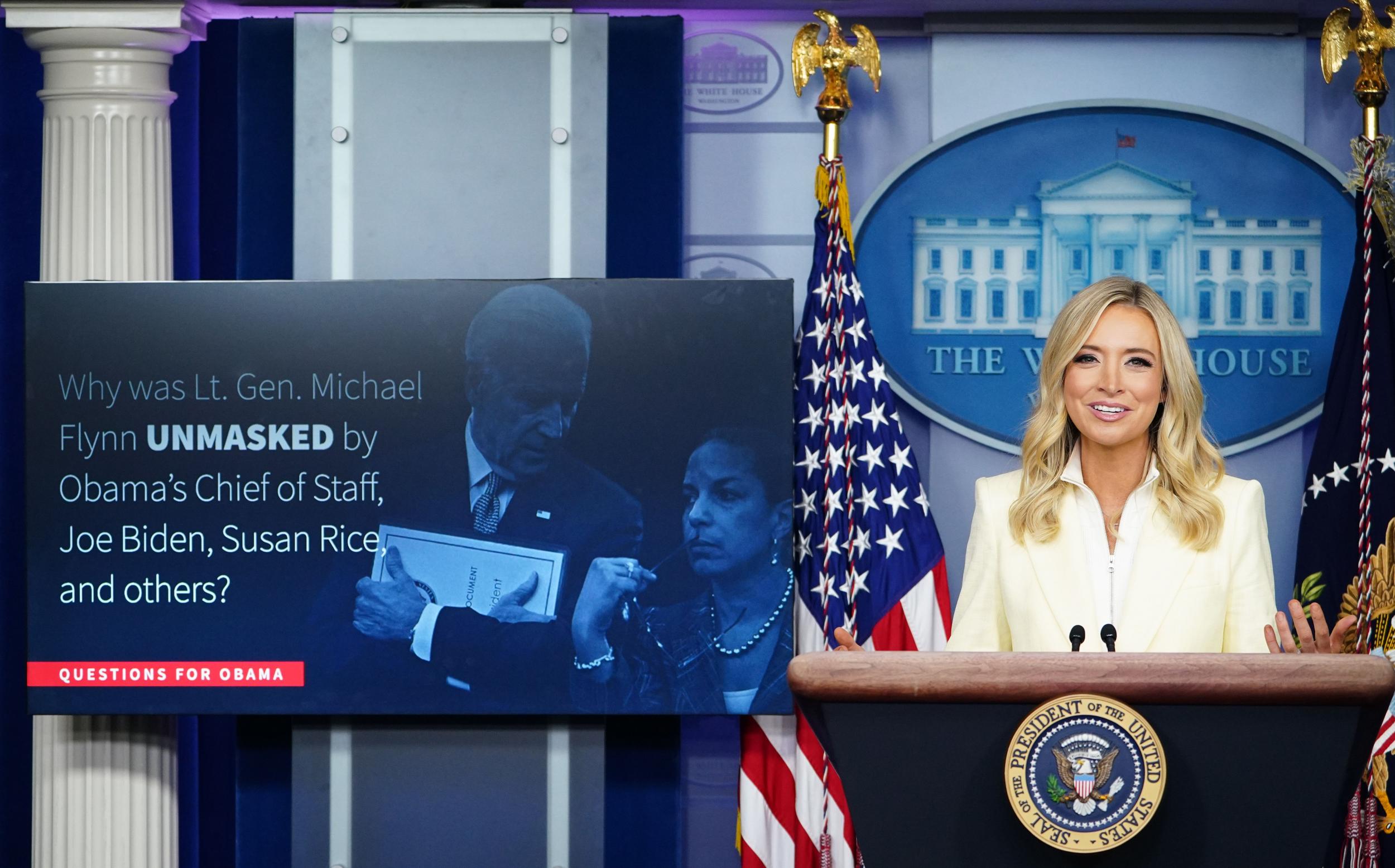 Chanel Rion with One America News, which the president has praised for its flattering coverage, asked whether Mr Trump was “considering pardoning” his predecessor, who hasn’t been convicted of any crime, for “illegally wiretapping” and “illegally spying on citizens” among “other potential crimes” as part of the president’s “Obamagate“ conspiracy, in which former Obama officials are accused of entrapping former national security adviser Michael Flynn as part of a “deep state” sting against his administration.

The question appeared to be an assist for the press secretary to read from prepared remarks and show several virtual slides with prepared “questions” for reporters to ask Mr Obama.

“Any good journalist would want to answer why people were unmasked,” Ms McEnany said. ”Did anyone take it upon themselves to pose any questions about Michael Flynn and unmasking to president Obama’s spokesperson? Not a single journalist has posed that question.”

Ms McEnany had previously called on the press last week to “investigate” Obamagate when was asked directly what crimes were committed by Mr Trump’s predecessor, after the president failed to explain his accusations. The president later thanked his “keyboard warriors” on Twitter.

During the briefing, the president also announced that we wants houses of worship to “open right now” and has instructed governors to do so, or he will threaten to “override” officials who defy him, he said.

But Ms McEnany failed to point to any federal statute that gives the president broad authority to do so and suggested that the press wants to continue closing churches, synagogues and mosques.

She said: “The president will strongly encourage every governor to allow their churches to reopen, and boy, it’s interesting to be in a room that desperately wants to seem to see these churches and houses of worship stay closed.”

The president announced that he has labelled houses of worship as “essential” during the coronavirus pandemic, and the Centres for Disease Control and Prevention (CDC) released new guidelines for worshipping with physical distancing and other mitigation efforts as nearly every state begins to ease restrictions from weeks of lock-down measures.

White House reporters objected to Ms McEnany’s remarks — Reuters reporter Jeff Mason told her he is ”dying to go back to church” — and pressed Ms McEnany over whether it is safe to reopen in areas where quarantine measures are still necessary.

“Jeff, it is safe to reopen your churches if you do so in accordance with the guidelines,” Ms McEnany said.

The CDC guidelines were not issued before the briefing.