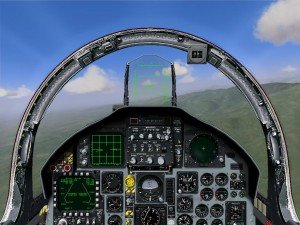 The cockpits are packed with detail.

Lock On: Modern Air Combat is a work of Eagle Dynamics, the creators of the Su-27 Flanker series, and comes at a time when flight sims were in general freefall all-around. In many respects this is a continuation of Flanker 2.5, and were it not for the sheer variety of flyable planes, it wouldnâ€™t be inappropriate to call it â€œFlanker 3.0.â€ While the interface and basic feel will be familiar to Flanker fans, everything from the graphics engine to the AI and sheer number of flyable aircraft has been updated.

The most welcome change is the addition of flyable American jets to the mixâ€”the F-15 Eagle fighter and the A-10 Warthog ground-attack jet. This not only allows a different combat experience, but also makes for much more interesting multiplayer action, since you can finally take Western jets up against their Russian counterparts. To complement the A-10 on the Russian side, Lock On includes the Su-25 Frogfoot, a similarly heavily armed but slow attack jet. Rounding out the list of flyable planes are the familiar Su-27 and Su-33 Flankers, as well as the widely spread MiG-29 Fulcrum.

The level of detail in each plane is unprecedented. At first glance youâ€™d assume the instrument panels were high-res bitmaps, at least until you hit the view hat and see that theyâ€™re actually stunningly rendered fully 3D virtual cockpits. And these arenâ€™t simplified renditions-systems, as the F-15â€™s APG-63 radar and the A-10â€™s Maverick TVM display will be rendered in full detail. (Thereâ€™s an â€œeasyâ€ radar for those who just want to hop in and start shooting.) Tutorial missions and detailed PDF â€œDash-1â€ systems manuals for each plane will help you earn your pilotâ€™s wings, but know in advance that it will take a good deal of work just to learn let alone master any of the six planes.

Flight modeling feels authentic, with significant handling differences between aircraft. AI pilots are much smarter here than in the Flanker games. They split as they enter the fight, use terrain masking to evade contact, and effectively deploy chaff and flares to spoof your missiles. 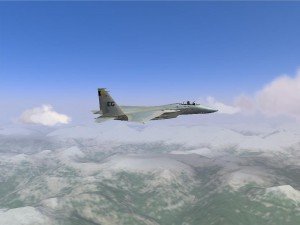 Lock Onâ€™s graphic engine is stunning, with the feel of flying through cloud cover being suitably awe inspiring.. The terrain and atmosphere effects are amazingly immersive – morning fog, sun rays peeking through the clouds, and realistic haze truly make you feel youâ€™re flying the unfriendly skies. Aircraft look amazing, and small details like the F-15â€™s air intakes adjusting at high angles of attack really bring out the attention given by Eagle Dynamics.

Unfortunately, the dynamic campaign initially planned was lost when a key programmer left the team. Instead, Lock On will ship with scripted campaign missions. But the addition of random elementsâ€”such as unit placement, time of day, and weapons loadoutâ€”will mean that the scripted missions wonâ€™t play the same way twice. The campaign will feature persistent damageâ€”take out a factory on one mission and it will remain destroyed on the next. The loss of the dynamic campaign is disappointing, but not a game killer. Far from it, as anyone looking to get the full punch of flying a jet fighter (and has the joystick and rudder pedal set to go with it) will want to try Lock On.

Can Hypnosis Help You Lose Weight?

The New York City Department of Education (NYCDOE), which manages the largest school district in the country, announced the change