The shooter that revolutionized the gaming industry. 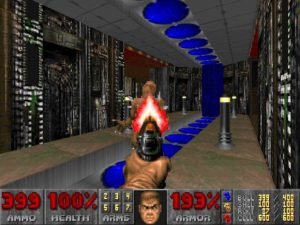 Doom has done more to establish the PC’s arcade clout than any other title in gaming history. The premise is a skimpy excuse to push you through the game’s 24 levels – a space marine gets stranded on an alien base as the denizens of Hell invade, and it’s his job to fight through the demonic lines with all the firepower he can carry. Dubbed a ‘mass-murder simulator’ by its critics, Doom was nothing short of revolutionary, eventually finding its way on the PlayStation and kiddy-oriented GameBoy Advance once the PC version had become a classic.

id Software’s Doom was a natural progression from the overwhelmingly well-received Wolfenstein 3D. Noticing they were on to something big, id made a goal of coding the right sort of engine that would support their next-generation 3D shooter. A sector-based system was implemented, allowing for complex levels that rendered realistic indoor and outdoor areas, complete with elevators, platforms, stairways, windows and doorways. In short, it made the grid-based labyrinths of Wolfenstein look immediately archaic. And while texture-mapped surfaces were around in games past (Shadowcaster), none were as detailed and sharp as those seen in Doom.

Great level design and the gruesome snarls, growls and screams of the rampaging demons around you made for one of the most realistic and frightening experiences you could hope for in a game. Walk into a dark corridor and you can barely make out a few feet in front of you, and you’ll never notice an enemy before their pixelated mugs are in your face. Or take the way your view bobs gently as you stride down empty corridors with your gun. It’s all clever and stylish, with a lavish attention to detail.

And let’s not forget the perversely satisfying gunplay. Whether you’re packing a shotgun, chaingun, rocket launcher, or the downright sinister chainsaw, you really want to get close and personal to see that pain. There are six ranged weapons in all – starting with the pitiful handgun and ending with the apocalyptic BFG9000, plus two more melee weapons, all of them spread far and wide over the course of Doom’s three episodes. 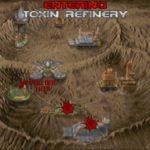 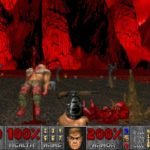 Come for the spikes, stay for the view. 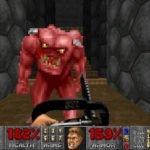 Gonna make me some demon steaks. 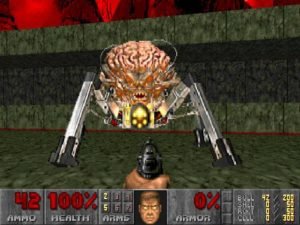 There’s some mind to the massacre, as you must fetch key cards to make progress through the maps. Even here the game makes it a worthwhile experience by adding a touch of devious scripting to wow and scare you. Often you may walk into a seemingly banal room with not a monster in sight, only to have the lights shut off and a door full of snarling demons burst open behind you. This trick is often used when you backtrack through a previously cleared area, making it always risky to let your guard down. Paranoia reigns.

Deathmatch via IPX was also pioneered by Doom, giving many players their first real taste of multiplayer gameplay. Supporting up to four players, people could shoot each other in any one of the game’s original 24 singleplayer maps, since there were no special deathmatch levels. Being such a classic, it’s hard to see why anyone would leave Doom out of their collection. And with the range of source ports and mods out there, including the insanely fun Brutal Doom mod, players of this classic can once again relish in its fast, demon-killing fun.