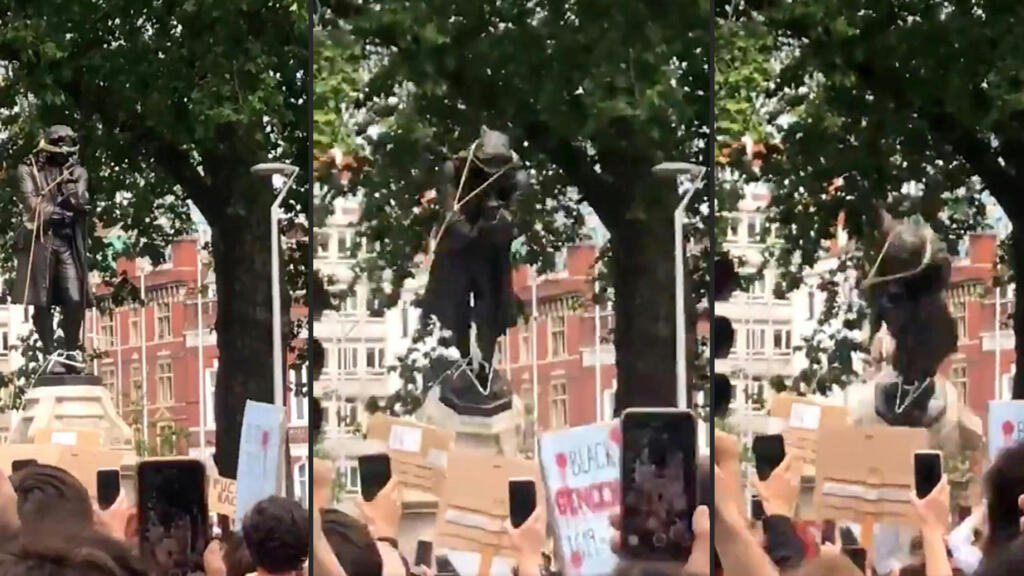 British protesters tore down the statue of a renowned slave trader Sunday and threw it in the harbour on the second day of weekend protests against George Floyd’s death.

Footage shot by a witness showed a few dozen people tie a rope around the neck of Edward Colston’s statue and bring it to the ground in the southwestern city of Bristol.

They then stamped on it for a few minutes before carrying it and heaving it into the harbour with a great cheer.

Colston’s face got splashed with red paint at one point.

“The statue of Edward Colston, a Bristol slave trader, was torn down, defaced, and thrown in the river. #BlackLivesMatter.”

But interior minister Priti Patel called the toppling “utterly disgraceful” and the city’s police promised to carry out an investigation.

“That speaks to the acts of public disorder that actually have now become a distraction from the cause which the people are actually protesting about,” Patel told Sky News.

“That is a completely unacceptable act and speaks to the vandalism, again, as we saw yesterday in London.”

The London police reported making 29 arrests during a day of largely peaceful protests Saturday that included a few scuffles with officers protecting the government district around Downing Street.

Bristol mayor Marvin Rees struck a more conciliatory tone than the one adopted by Patel.

“I know the removal of the Colston Statue will divide opinion, as the statue itself has done for many years,” the mayor said in a statement.

“However, it’s important to listen to those who found the statue to represent an affront to humanity.”

“The vast majority of those who came to voice their concerns about racial inequality and injustice did so peacefully and respectfully,” the police chief said.

“However, there was a small group of people who clearly committed an act of criminal damage in pulling down a statue near Bristol Harbourside.”

Colston grew up in a wealthy merchant family and joined a company in 1680 that had a monopoly on the west African slave trade.

The Royal African Company (RAC) was formally headed by the brother of King Charles II who later took the throne as James II.

The company branded the slaves—including women and children—with its RAC initials on their chests.

Colston later developed a reputation as a philanthropist who donated to charitable causes such as schools and hospitals in Bristol and London.

His 18-foot (5.5-metre) bronze statue stood on Bristol’s Colston Avenue since 1895. The city also has a school named in his honour.

The Guardian newspaper said a local petition to remove the statue had gathered 11,000 signatures by the weekend.

“Someone responsible for immeasurable blood & suffering. We’ll never solve structural racism till we get to grips with our history in all its complexity. #BLM”

Good. If statues of confederates who fought a war for slavery & white supremacy shld come down then why not this one? Someone responsible for immeasurable blood & suffering. We’ll never solve structural racism till we get to grips with our history in all its complexity. #BLM pic.twitter.com/Bk8cYHk0rM

The Colston statue wasn’t the only historic sculpture to have been targeted by protesters over the weekend.

In London, protesters defaced the statue of former British Prime Minister Winston Churchill outside Parliament, crossing out his last name and spray painting “was a racist” underneath.

Thousands joined a Black Lives Matter rally in Brussels, where protesters clambered Sunday onto the statue of former King Leopold II and chanted “reparations,” according to video posted on social media. The word “shame” was also graffitied on the monument, reference perhaps to the fact that Leopold is said to have reigned over the mass death of 10 million Congolese. A bust of Leopold’s in the city of Ghent has also been defaced, daubed in red paint and covered with a cloth scrawled: “I can’t breathe.”

Leopold’s ruthless early rule over Congo from 1885 to 1908 is notorious for its brutality when the Congo Free State was practically his personal fiefdom. After Leopold handed over Congo to the Belgian state, the tiny nation continued to hold sway over an area 80 times its size half a world away, until independence in 1960.

And in Virginia, Gov. Ralph Northam has pledged to remove the Gen. Robert E. Lee statue, and city leaders have committed to taking down the other four Confederate memorials along Richmond’s prestigious Monument Avenue.